Seasons of Change: Do Positive Emotions Pack a Punch for Behavior Change?

There’s always next season. It’s a phrase DC sports fans know a little too well. To be fair, I’m sure every city (except maybe Boston) can relate. It’s also a phrase that, if you can get past the disappointment it inevitably follows, points to the eternal optimism that can be nurtured when goal attainment is thought of as a cycle in continual renewal. I can put my Nats gear away for a while rather than toss it because I can count on there being another chance for success. It’s just part of the process.

When it comes to many health behaviors, though, it’s easy to slip into thinking in binary terms. “Do, or do not; there is no try,” our insecurities whisper. What if we could get in the habit of thinking about our other goals in terms of seasons? Seasons that are perhaps punctuated by setbacks. What might seem more achievable?

Take smoking for example. Some estimates suggest it takes many people 30 or more attempts to quit smoking for good.  It’s so difficult to quit smoking that even though two  out of three smokers want to quit, only about half of those people even attempt it and only 7% are successful. Those attempts objectively may be progress, but they can feel like failure and frustration.

We can begin to reframe the conversation by examining the types of emotions we as strategic communicators are harnessing in attempts to motivate.

Graphic, hard-hitting campaigns (for example, CDC’s Tips from Former Smokers) certainly have their place and have been successful. Eliciting “negative”  emotions with shocking imagery got people’s attention, opened the door to education, and created the sense of urgency required to invoke the majority of smokers to take that ever difficult first step.

While that jolt may have helped create the desire to quit and a foundational awareness of harmful effects, many smokers struggle to maintain hope that they can be successful in quitting. With a lucid awareness of the negative health consequences, many struggle with what they perceive as failed quit attempts – and their motivation to try again suffers as a result. Reframing that quit process through positively framed messages presents an opportunity then to support people in reaching the finish line.

In that vein, multi-phased qualitative and quantitative research that I along with colleagues at Fors Marsh Group conducted in collaboration with FDA and their Every Try Counts  campaign was presented at the American Public Health Conference last week. This research showed that smokers were more motivated to quit, and were more hopeful of their ability to do so, when presented with positive, encouraging print ads. The Every Try Counts campaign, a first of its kind national cessation campaign in the point-of-sale environment, aims to motivate quit attempts by: 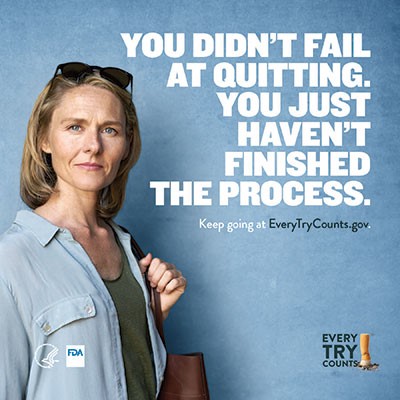 Working on Every Try Counts was a special  experience for me. Much of my other work has been prevention-focused, and the formative research/conversations with people struggling to quit smoking touched me in a different way that is still raw years later. Support and a nudge here looked like positive encouragement.

Bigger picture, we can apply a similar strategy of using positive emotions to influence behaviors in a variety of other public health (and other) contexts where meaningful, lasting change is so stubborn and difficult to achieve. Knowing when and how to do so in your messaging is a nuanced topic. For now, we’ll leave you with the following food for thought:

Kudos  to the many big, bright, creative minds and hearts behind Every Try Counts and a powerful strategy and execution that together provide an example of behavior change motivation via positive framing and emotion elicitation.

And to anyone struggling (with smoking cessation or otherwise), there’s always next season so to speak. “You just haven’t finished the process.”